Feminism is no more a brand than Catholicism or Islam or liberalism or atheism. All of them are ways of viewing the world. They can – and indeed do – change and evolve over time but via a natural evolution that occurs organically, driven by those who passionately believe, not by the phony, please-everyone, marketing-think that goes into re-branding. Most conventional re-branding exercises, by the way, are not effective. The best and most long-lasting brands are classic brands – Coke, for example. Coke has lots of negative connotations – rots your teeth, makes you fat, only drunk by losers and the children of lousy parents – yet it (usually) loftily ignores all that and goes on being its unhealthy self and selling a motza. The few times it lost its nerve and attempted to re-brand itself – new Coke, cherry Coke, and the appalling Kerry Armstrong Coke-isn't-really-bad-for-kids ad campaign – it came a terrible cropper.

Re-branding is an admission of defeat. It accepts the opinion of the critics, of those who do not like or support the original. It tries to win over those who will never be won over and in doing so, not just loses the people who always supported and believed in it, but actively slaps them in the face. That's why actual brands that try to re-brand often fail and also why political movements and philosophies do too. Don't believe me? Just look at the ALP. It's been trying to re-brand itself as a party of the centre for decades and has compromised itself almost out of existence to attract swinging voters (by definition non-loyal users). In so doing it has fundamentally ignored its core supporters, many of whom have quietly walked out the back door and joined the Greens. According to new leader Bill Shorten, only 34 out of 100 voters put the ALP first in the last Federal election.

Successful brands are not perfect and do not please everyone, but they have some sort of integrity. Movements and philosophies that aim to change the world must have unassailable integrity – particularly in the face of harsh criticism and hard times. When the going gets tough, the last thing feminism should do is buckle under the pressure and deny its history and its achievements. Then the enemies of feminism really have won. As the great feminist Dale Spender famously put it;
"Feminism has fought no wars. It has killed no opponents. It has set up no concentration camps, starved no enemies, practiced no cruelties. Its battles have been for education, for the vote, for better working conditions.. for safety on the streets... for child care, for social welfare... for rape crisis centers, women's refuges, reforms in the law. If someone says 'Oh, I'm not a feminist,' I ask 'Why? What's your problem?'"

To re-brand feminism is to attempt to placate and soothe those that feminism has disturbed and threatened. I understand that for many women – brought up (as we all are) to please, placate and be liked – stubbornly identifying as a feminist takes courage and confidence. For many anything beyond silent agreement is almost impossible. Yet the hard truth is that the more invective is hurled at feminism the more effective it has become because abuse intensifies in proportion to threat. No-one ever gives up power voluntarily, it must be fought for and fighting is hard and quintessentially not-nice. To walk away from the proud 300 year history of feminism via some kind of re-brand (what would we call it - Equalism? Anti-sexism? Women's rights? It was Women's Lib for a while) would be a profound betrayal of all the women who have ever stood up to the abuse and claimed the name.

And don't talk to me about young women not being attracted by feminism. They never have been – unless lucky enough to have a feminist mother. Young women believe that things will be different for them. I get that; it is part of being young and optimistic to believe that any difficulties are exaggerated by the generation before you. And pretty young women have a sexual power they think will last forever. What radicalizes women is what always has; ageing, marriage and motherhood. That's when the doors slam shut and when many women suddenly realize just how profoundly they need feminism.

Feminism aims to change the world. To do so it cannot play nice and strive for love and approval. It must, as it has always done, remain true to itself in the face of scorn, ridicule and abuse -- even from those whose lives it has immeasurably improved. It must be brave, stubborn and pugnacious. It must continue to speak difficult, uncomfortable truth to power. It must continue to disrupt, disturb and threaten. That's its job." 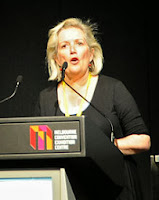 Jane Caro (born London, 1957) is a social commentator, writer and lecturer based in Australia. Caro migrated to Australia in 1963. She graduated with a Bachelor of Arts in English literature from Macquarie University in 1977.[1]
Caro has appeared on Channel Seven's Sunrise, ABC television's Q&A and as a regular panelist on The Gruen Transfer. She also undertakes regular radio work. Caro has worked in the advertising industry and lectures in advertising at the School of Humanities and Communication Arts at University of Western Sydney.[2]
She is on the boards of the NSW Public Education Foundation[3] and Bell Shakespeare.[4]
Caro says she is a feminist and atheist.[5
Lähettänyt SANL klo 5.29