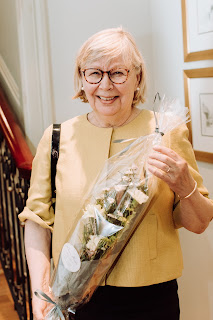 Stable and peaceful societies can reach their full potential in solving economic and political challenges and potential conflicts that lie ahead. Peace is not only absence of bombs and tanks in towns. Peace is where there is freedom from fear, freedom from oppression, freedom to make your best towards constructing just and prosperous living conditions for all.

During this global turmoil that we are experiencing at the moment, turmoil in individual minds makes people insecure. Insecure citizens are scared. Scared of the unknown.

When Dean Virginia Gildersleeve of Barnard College, USA, Professor Caroline Spurgeon of the University of London, and Rose Sidgwick of the University of Birmingham met on a visit of British universities mission in the USA after the 1st World war in 1918, their focus was largely on the war-torn Europe. In their discussions on future understanding and possible peace between nations, the delegation was inspired by the idea of a worldwide organization that could unite university women across the world. The International Federation of University Women, later called Graduate Women International, was born.

Sharing the early leaders’ vision, the Finnish Federation of Graduate Women (FFGW) is celebrating its 100th anniversary in 2022. During a century of advocacy the Finnish organization has established friendships and promoted understanding between academic women across the world. In national and international projects and workshops, excursions and panel discussions, women have been encouraged to reach their full potential not only in working life, but in life itself.

Education is key to construct trust and harmony in society. The focus of the FFGW has been on the importance of education, such that is available equally to everyone in society. The advocacy of Finnish Federation of Graduate Women reaches beyond national borders: it founded the International Helvi Sipilä Seminar held annually in the United Nations Commission on the Status of Women CSW in New York, and the organization contributes regularly to the ECOSOC, ILO and UNESCO together with its sister organizations.

Article 1 of the Universal Declaration of Human Rights states: All human beings are born free and equal in dignity and rights. Notions such as freedom and equality in dignity and rights cannot be imported into nations. They need to be born there. Peace and harmony cannot be imported into the human mind. They need to be born there.

Stability of society is dependent on its intellectual and material wealth, but even more so on society’s ability to create a sustainable future for its people. The future of society is embedded in the spirit of its people.

Our privileged generations in the decades before 2022 were of the opinion that international problems can be solved through dialogue. Words are powerful. There was no doubt about the fact that any potential future international misunderstanding could be settled by word of mouth. With words there is an immediate choice: they point either to peace or conflict.

In searching for stability and peace in societies, focus needs to be on people. First, people themselves are the main capital in our world community, before high technology, economics, or material wealth. People and families are the prime building block in society, and if people are not well, society faces the risk of losing its wellbeing.

Secondly, we need to value the power of each creative human mind. We need to see individuals not categorized plainly according to notions such as gender, age, wealth or political standing. People are the prime source of developing trust in societies.

Thirdly, while equal opportunities in education belong to all members in our hybrid societies, including refugees from foreign lands, we in the role of educators should value also the opportunity to learn from representatives of other communication cultures. Trust and harmony begin at schools and playgrounds. There we should interfere immediately when first intercultural aggressions, often in words, begin. Inter-cultural education for the young, resulting in enhanced communication skills, is an avenue towards a balanced self and a more balanced society.

Finland is known, besides for being ‘the happiest country in the world’ according to international charts, also for its capability of providing mediators for international conflict management. Former President of Finland, Martti Ahtisaari was awarded the Nobel Peace Prize in 2008 for his great efforts to mediate peace on several continents. In international peace processes mediators, men and women, look for responsible people and institutes that are committed to contributing stability and sustainable societal development in areas causing conflicts. Still in 2022 women tend to be missing from international negotiation tables.

In conflict prevention religions are often named as causes for conflicts. Yet in most world religions dignity and respect for the other are traditional core values. Christianity, Judaism, Islam and religions such as Hinduism and Buddhism call people to respect each human being and value each person as equal to another. A question arises what kind of perturbation in the interreligious dialogue has taken place as communication between representatives of different faiths has failed to develop harmony in our world society.

When we blame religions for conflicts and wars, we may forget that it is not religions but people who disagree with each other. It could contribute to general harmony if official representatives of religions explicitly clarified current core values in their beliefs. Such a clarification would make a conceptual distinction between what is considered mainline religion, fundamentalism, radicalism, or plain human violence that has no connection to any religion.

What happened to freedom, dignity and equal human rights in our current world community? Victims of war are suffering from hunger, violence and oppression in Europe today. Refugees live in fear, not only of wars and terrorism, but of ordinary people who do not accept them as equal human beings.

Looking back on the early days of the Finnish Federation of Graduate Women we know that women can make a difference. Bridges can be built, not destroyed. Wars must not be the way to solve conflicts in today’s world. Can we continue to live in this shame?